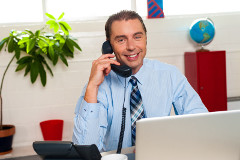 William is concerned with his group getting their job done. He is under budget pressure, time pressure, and requirements to deliver. William is a good manager – he is concerned for his people and dedicated to removing obstacles that get in their way.

To a large degree William is measured on current performance and expectations for the next quarter. This means that he has little sympathy for other departments getting in the way of his people making the business successful! A lot of his job involves working with other groups to make sure that they meet his needs. And when they don’t, he gets them over-ruled or works around them.

When William does planning – and he does! – he is focused on generating business value and getting results that benefit him and his team. He is not especially concerned about global architecture or systems design or “that long list of hypothetical security issues”. Get the job done, generate value for the company, and move on to the next opportunity.

William sees IT departments as an obstacle to overcome – they are slow, non-responsive, and keep doing things that get in the way of his team. He sees the security team in particular as being an unreasonable group of people who have no idea what things are like in the real world, and who seem be be dedicated to coming up with all sorts of ridiculous requirements that are apparently designed to keep the business from succeeding.

William, with the best of intentions, is likely to compromise and work around security controls – and often gets the support of top management in doing this. To be more blunt, if security gets in the way, it is gone! If a security feature interferes with getting work done, he will issue orders to turn that feature off. If you look at some of my other posts on the value of IT and computer systems, such as Creating Business Value, you will see that, at least in some cases, William may be right.

And this is assuming that William is a good corporate citizen, looking out for the best interests of the company. If he is just looking out for himself, the situation can be much worse.

It is not enough to try to educate William on security issues – for one thing (depending on the security feature), William may be right! The only chance for security is to find ways to implement security controls that don’t excessively impact the business units. And to keep the nuclear option for the severe cases where it is needed, such as saving credit card numbers in plain text on an Internet facing system. (Yes, this can easily happen – for example, William might set up a “quick and dirty” ecommerce system on AWS if the IT group isn’t able to meet his needs.)

A technology strategist and product manager at Red Hat, working on the next generation of open source systems.
View all posts by Russell Doty →
This entry was posted in Security. Bookmark the permalink.

2 Responses to Threats: William the Manager